I’ve always been fascinated by Lucy Boston’s Patchwork of the Crosses ever since I saw a block of English Paper Piecing using this pattern.

Having a background and preference for machine piecing, this led to making blocks of a larger size suitable for ‘American’ hand piecing.

After having a go at making blocks, it was an ‘Ahh ..’ moment, I became hooked and still am!

But what to do with the left over patches? Throw them out, give them away to a kindergarten, or maybe ‘recycle/reuse’ them.  After all, they took time to select, cut out, and consider.

During  the creation of a Pinterest board,  dedicated to collecting the fabulous variations of Lucy’s block, these three ideas have emerged – with thanks to the mathematically minded!

Have you, like me, put aside those single patches, with a feeling of ‘just can’t quite throw it out yet!’

Make a scrappy quilt with the single patches …

When there are pairs left over, try this layout … 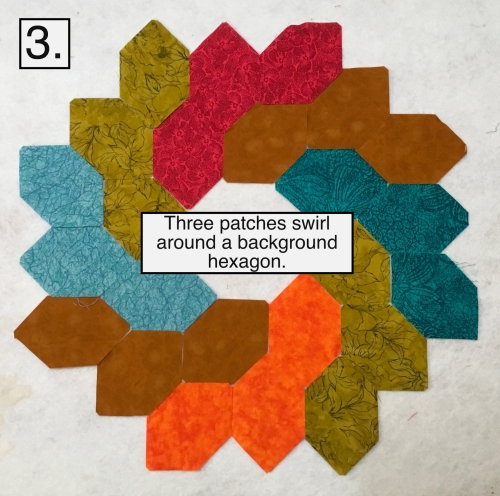 I think Lucy would like the idea of using up left over patches.

This entry was posted in Patchwork of the Crosses and tagged hand piecing, POTC, scrap quilts. Bookmark the permalink.