Do you go on patchwork retreats?

When life gets busy, go on retreat – and enjoy the company of lovely ladies while devoting a whole weekend to continuous stitching. Relaxing on the balcony of the ‘Millhouse Retreat’, in the warm autumn sun recharging the mind and body, while munching on a delicious lunch from the Ballan Bakery, what could be better?

That’s easy – having a squiz at some yummy retreat patchwork!

Judy H worked on two children’s quilts for some very special twins, who have just moved from a cot into their very own beds. Judy’s quick quilting, mainly using a walking foot, inspired us to go home and get out those tops we all have stashed away, and get moving on finishing them. I wonder if that will happen – perhaps we’ll find out when we go back to Millhouse Retreat next year! 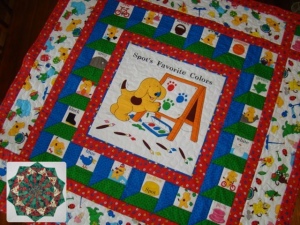 Lovely Lucy worked steadily away on her ‘Georgetown Turnaround’ pattern by Trish Harper. Lucy adapted this quilt by making it into two smaller quilts, which will be sent to a friend in Hawaii. Her fabulous fussy cut packs of fabrics came from Chandler’s Cottage, designed by Leesa Chandler. 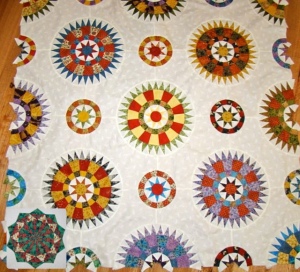 Cheryl got the prize for taking up the least amount of space, the rest of us were spread out all over the tables and even the floor. Cheryl works with beads and made this stunning necklace, which of course we had to enviously model, along with some new clothes we bought from ‘Zirela’s, fashion shop just down the street. 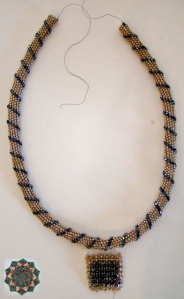 Quiet Rhonda finished a top for a very special boy in her life, he just loves tigers! The creative use of a big print ‘panel’ fabric into a ‘spaced colour harmony’ makes this a very pleasing and visually appealing quilt. 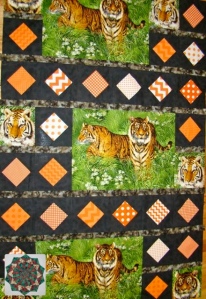 Rhonda also continued working on her ‘Arabesque’ by Michelle Hill. We all thought the use of a pizza box to store the large sized blocks a super idea – and so obvious – why hadn’t we thought of it! Oh – it is a clean unused box. 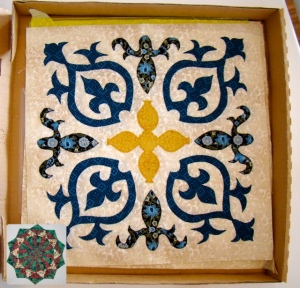 Sheryl H is very fussy when it comes to putting patchwork together, both in the use of colour and sewing blocks – if it’s not right, it gets changed! Seams needed to line up with this one – a very bright and modern two colour quilt based on a large black and white feature print.

After several visits next door to ‘Millrose Cottage’, Sheryl finally found fabric to keep working on Chris Serong’s ‘Modern Circles’ quilt – which was begun in her ‘Tutor of Note’ workshop with the ‘Patchworkers and Quilters Guild of Victoria’. 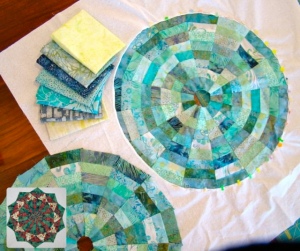 Julie – DSL- is leaping into thread work on her very modern quilt. Combining  variegated threads of different weights and type with machine stitches – you know those dozens of fancy things we never seem to get around to using but are a major selling point for sewing machine brands, – experimented with ‘dribbling’ the paint out into the border. Once finished, yes out of all of us Julie is a ‘finisher’, there will be three panels as wall hangings.

Judi C made a stack of ‘Courthouse Steps’ traditional blocks for her version of Guatemalan art quilter Priscilla Bianchi’s ‘Steps to Tikal 11’, as seen in ‘Australian Quilters Companion’ #22.

What to do with linen in your cupboard – cut it up into blocks, sash it and make a runner! That’s what Judi is doing with these Christmas tea towel embroideries, another round of colour and it will be done in time for next Christmas – hopefully.

Lydia braved her way, with the help of some heat rub gel, through a painful back to cut up triangle after triangle – I don’t think Lydia will be making another triangle quilt after this one! Once the stack was high enough the sewing began for this bright and colourful children’s quilt. Both the grey and yellow spot fabrics are a perfect choice.

Sue C made use of her ‘Accucut Go-Cutter’  and the free pattern that comes with the die, to make the machine appliqué ‘GO! Pomegranate Quilt’ by Alex Anderson. Sue is an aficionado of all things orange and green, so of course this quilt not only appealed but just had to be in her favourite colours.

And what did I do? Began foundation sewing strips of Kaffe Fasset fabrics to make a zig-zag runner. Got as far as placing the blocks (on the floor of course!), and playing with possible alternative layouts.

My aim for the weekend was to finish putting together my version of Chris Serong’s wedge ruler ‘Modern Circles’ quilt. The basic blocks needed to be sashed and the borders put on – done! What’s left is to appliqué down the Dresden fans, layer and quilt, but that’s another story.

I hope you’ve enjoyed this patchwork ‘eye candy’ of the ‘Sue’s group’ 2015 retreat at Millhouse in Ballan, Victoria, Australia.