On display at the Australian Quilt Convention, there were several themed exhibits, one of which is Lucy Carroll’s ‘The Gallipoli Quilt’. This series of quilts depicts the life experiences of a soldier throughout the Gallipoli campaign (at the Dardanelles in Turkey, during World War 1). As we Australians are marking the 100th Anniversary of ANZAC Day on April 25th, it was very moving to see and read this commemoration. This is just one in the series. Hop over to Carol’s site to see the quilts and read the full story.

Jan Irvine-Nealie  from New South Wales, had a display of her amazing textile work. I was so distracted examining up close her hand stitching on airbrushed pigment that I forgot to take a photo! So go to her site to have a look, but remember to come back here for the rest of the AQC tour post.

The ‘Teach Me‘ display featured works made by the tutors who were conducting classes at AQC. Two in particular stood out for me. This precise paper pieced quilt by international quilt artist Jacqueline de Jonge, positively glittered in the light, this photo doesn’t do the sparkle effect justice at all. 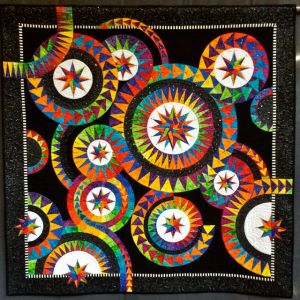 One of the blogs I follow is Esther Aliu and her amazing appliqué quilts. She has been leading a very large world wide group of followers in making several of her original designs. One in particular gained huge international recognition and now there are many of this particular quilt being made across the globe. 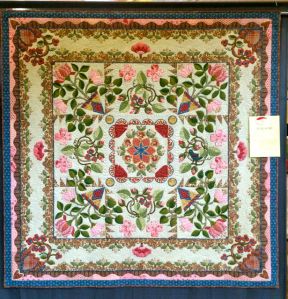 The ‘Best of the Best’ were quilts selected by state or territory guilds. Of course there were a lot more to see, these are just a few. From Queensland Quilters Inc. came a black and white quilt which utilises the QYG (Quilt as You Go) method of construction and the choice of background fabric makes it zing! It may be hard to see in the photo – it’s like a spider’s web when you see it up close. Took this photo for you Sheryl (she just loves collecting and using black and white fabrics)! 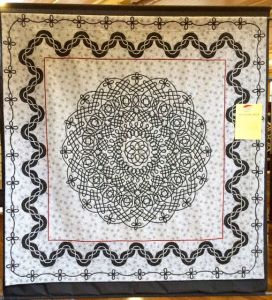 Again from Queensland, an applique stripy quilt, with a pieced background, added visual depth for the ‘hot’ colours to pop forward. Notice that this has no bottom border, it makes it look like a pelmet or cornice above wallpaper.

Another from Queensland, a Judges Choice lived up to it’s title, there were no mice to be seen in the building! Rather than being a stark contrast between the black and white fabrics and the very bright owl, Jenny included some very small splashes of orange in specific parts of the background which unified, and added dimension, to the quilt.

An art quilt using raw edge appliqué and stretch velour fabric, was presented by the Canberra Quilters Inc. Us Aussie’s appreciate the ‘unrealistic vibrant colour of the lizard’ and the play on words by Bronwyn in reference to a popular film.